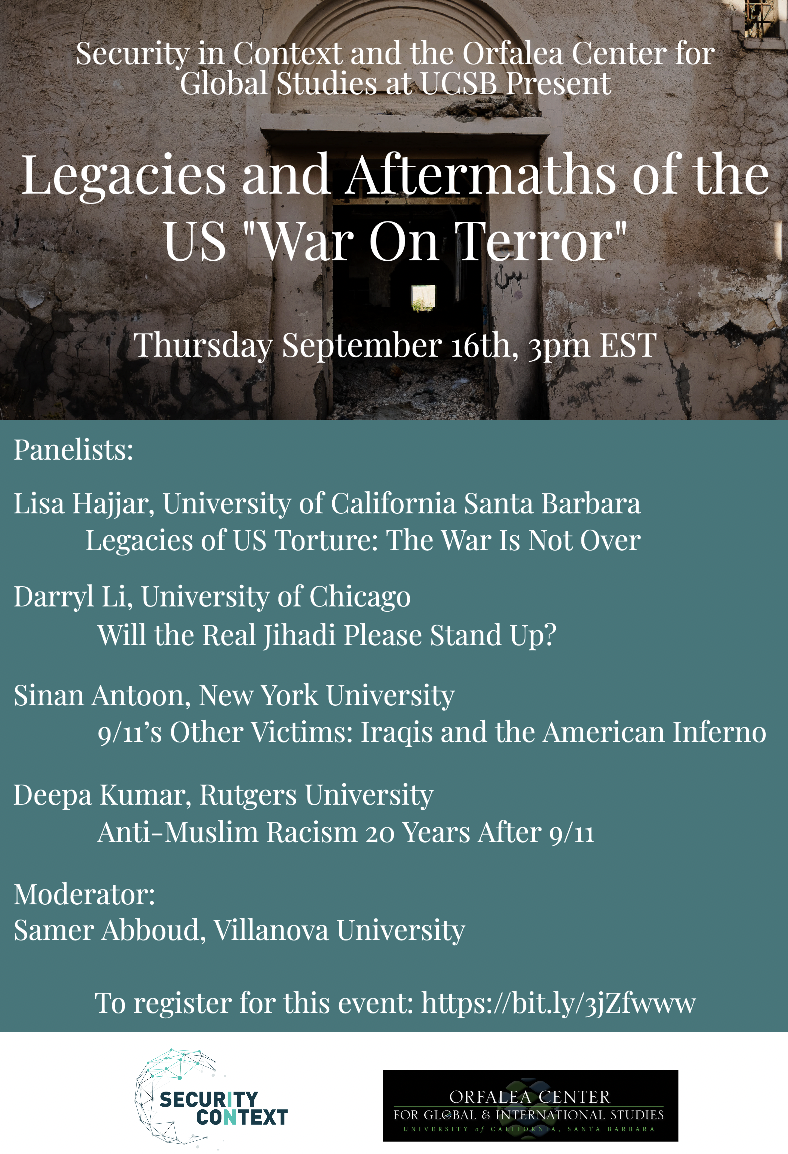 Legacies and Aftermaths of the US "War On Terror"

Security in Context and the Orfalea Center for Global Studies at UCSB present: Legacies and Aftermaths of the US "War On Terror."

Join us on Thursday September, 16th at 3pm EST.

Legacies of US Torture: The War Is Not Over

Will the Real Jihadi Please Stand Up?

9/11's Other victims: Iraqis and the American Inferno

Lisa Hajjar is a professor of sociology at the University of California – Santa Barbara. Her work focuses mainly on issues relating to law and conflict, including military courts and occupations, torture, targeted killing, war crimes, and human rights. Her publications include Courting Conflict: The Israeli Military Court System in the West Bank and Gaza (University of California Press, 2005) and Torture: A Sociology of Violence and Human Rights (Routledge 2013). Her new book, The War in Court: The Inside Story of the Fight against US Torture in the “War on Terror,” will be published by the University of California Press. She is a founding co-editor of Jadaliyya and a member of the editorial committee of Middle East Report.

Darryl Li is an anthropologist and attorney working at the intersection of war, law, migration, empire, and race with a focus on transregional linkages between the Middle East, South Asia, and the Balkans. Li is the author of The Universal Enemy: Jihad, Empire, and the Challenge of Solidarity (Stanford University Press, 2020), which develops an ethnographic approach to the comparative study of universalism using the example of transnational "jihadists" -- specifically, Arabs and other foreigners who fought in the 1992-1995 war in Bosnia Herzegovina.  Li has participated in litigation arising from the "War on Terror" as party counsel, amicus, or expert witness, including in Guantánamo habeas, Alien Tort, material support, denaturalization, immigration detention, and asylum proceedings. He is a member of the New York and Illinois bars.

Sinan Antoon is a poet, novelist, translator, and scholar. He was born and raised in Baghdad where he finished a B.A in English at Baghdad University in 1990. He left to the United States after the 1991 Gulf War. He was educated at Georgetown and Harvard where he obtained a doctorate in Arabic Literature in 2006. He has published three collections of poetry in Arabic; Mawshur Muballal bil-Hurub (Cairo, 2003,)Laylun Wahidun fi Kull al-Mudun (One Night in All Cities) (Beirut/Baghdad: Dar al-Jamal, 2010), and Kama fi ‘l-Sama’ (As in Heaven) (Beirut/Baghdad: Dar al-Jamal, 2019). His first novel, I`jaam (2003), has been translated into English as I`jaam: An Iraqi Rhapsody (City Lights, 2006) as well as Norwegian, German, Portuguese, Italian, and Persian. His second novel, Wahdaha Shajarat al-Rumman (The Pomegranate Alone) (Beirut: al-Mu'assassa al-`Arabiyya, 2010, Dar al-Jamal, 2013), was translated by the author and published by Yale University Press in 2013 as The Corpse Washer.

Deepa Kumar is an award-winning scholar and social justice activist. She is Professor of Media Studies at Rutgers University. Her critically acclaimed book Islamophobia and the Politics of Empire (2012) has been translated into five languages. The second and fully revised edition, published in 2021, marks twenty years of the War on Terror. Dr. Kumar has authored more than 80 books, journal articles, book chapters, and articles in independent and mainstream media. She has shared her expertise in numerous media outlets such as the BBC, The New York Times, NPR, USA Today, the Danish Broadcast Corporation, TeleSur and other national and international news media outlets.

Samer Abboud is Associate Professor of Global Interdisciplinary Studies at Villanova University and the co-coordinator (with Omar Dahi) of the Arab Council for the Social Sciences' working group on Critical Security Studies. He has published (with Benjamin Muller) Rethinking Hizballah: Authority, Legitimacy, Violence (Ashgate) and a book on the Syrian conflict entitled Syria (Polity Press). In addition to a number of book chapters and articles in journals such as Citizenship Studies, Security Dialogue, New Political Science, and Middle East Policy. His current research is broadly interested in the relationships between violence and political economies of conflict, especially in Syria.