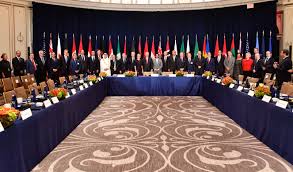 Co-hosted by the Forum on the Arms Trade and Security in Context.

Over the past decade the Middle East has witnessed upheavals and violent conflicts that have resulted in a devastating human toll. Over the same time-period, there has been a growing debate about the nature of United States engagement in the region- what it is and what it should be. This panel will bring together experts on US foreign policy with scholars of the Middle East to discuss United States presence in the region from different perspectives.

Panelists will also explore what concrete policy alternatives presidential candidates and United States policymakers should consider in terms of broader United States engagement with the region.