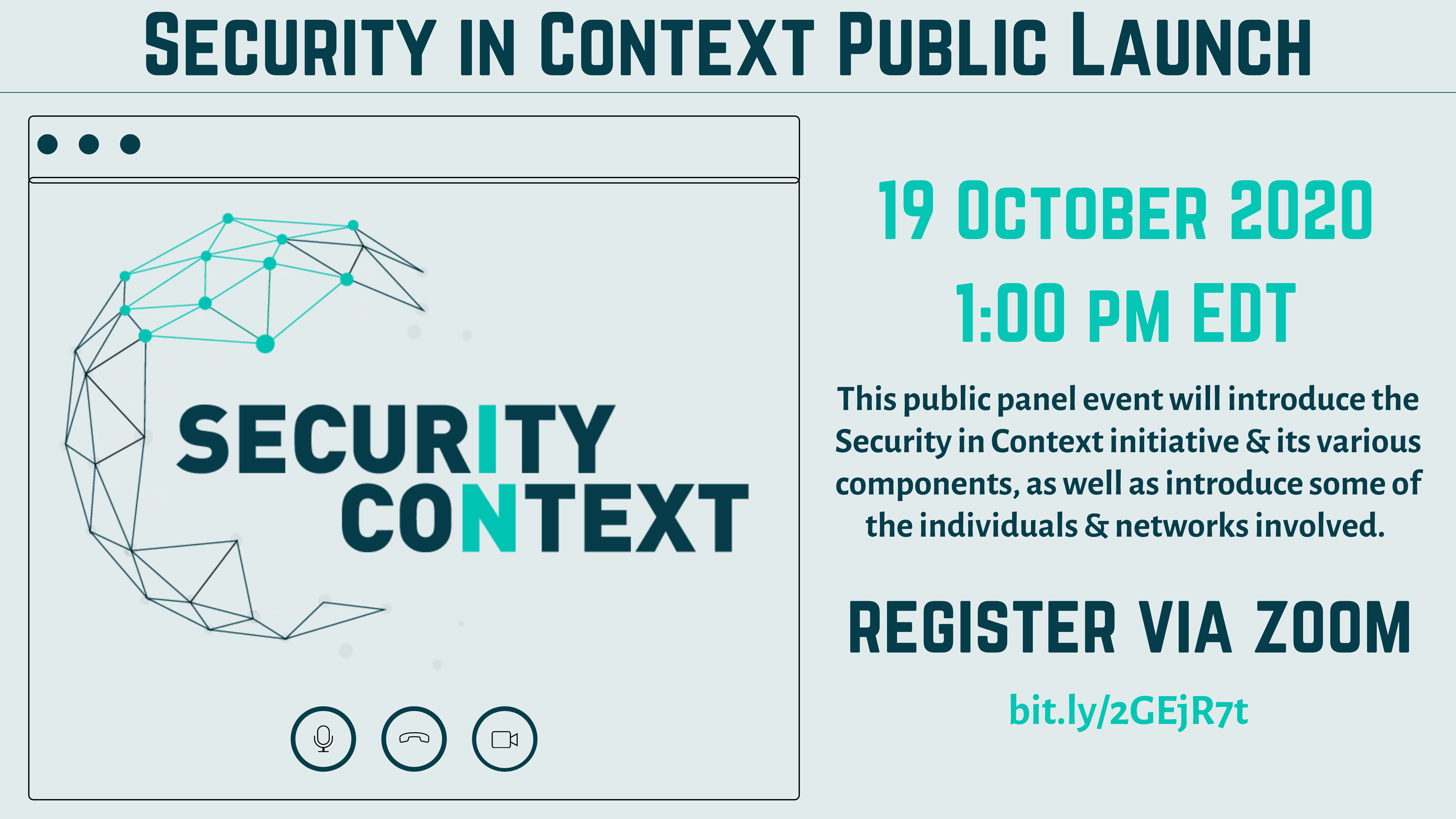 To watch the full video of our launch event, click here

Security in Context is an interdisciplinary research and pedagogy initiative that promotes critical research and policy analysis around key questions related to peace and conflict, political economy, development, the politics of in/security and militarism, particularly as they intersect with issues related to emerging technologies, mobility, infrastructure, climate change and geopolitics. As a collective, members of the project are working toward bridging scholarly research and public engagement with a center of perspectives from and about the global South.

Fikret Adaman (BA and MA in economics at Boğaziçi University and PhD in economics at University of Manchester) is professor of economics at Boğaziçi University. His research interests include alternative economies, ecological economics, history of economy thought, political ecology, political economy of Turkey, and social policies. He has been acting as expert to the European Commission for Turkey on social exclusion. He served as chair to the economics department and advisor to the rector of Boğaziçi University. As a guest lecturer/researcher he served in Bologna, Erasmus, UTAH, Manchester, Purdue and UMASS universities. His publications appeared in, among others, Antipode, Cambridge Journal of Economics, Conservation Letters, Development and Change, Ecological Economics, Energy Policy, Environmental Politics, Environment and Planning C, Environmental Politics, European Journal of History of Economic Thought, Geoforum, Journal of Economic Issues, Journal of European Social Policy, Journal of Peasants’ Studies, New Left Review, Voluntas. His co-edited book Neoliberal Turkey and its Discontents: Economic Policy and the Environment Under Erdoğan has recently been published (IB. Taurus).‍

Dr. Amar is a professor of Global Studies trained in political science and anthropology with a long history of research, teaching and publishing in the field of Critical Security Studies. He holds affiliate appointments in Feminist Studies, Sociology, Comparative Literature, Middle East Studies, and Latin American & Iberian Studies. Before he began his academic career, he worked as a journalist in Cairo, a police reformer and sexuality rights activist in Rio de Janeiro, and for six years as a conflict-resolution and economic development  specialist at the United Nations. His books include: Cairo Cosmopolitan (2006); New Racial Missions of Policing (2010); Global South to the Rescue (2011); Dispatches from the Arab Spring (2013);  and The Middle East and Brazil (2014). Recently, he is Chair of Middle East Studies, founding director of the PhD program in Global Studies, and Director of the Global Security Studies hub at UCSB. He is a founding editor of the journal “Critical Military Studies” and a reviewer for landmark journals such as Security Dialogue, Critical Terrorism Studies, and the International Journal of Feminist Politics. His book “The Security Archipelago” won the Charles Taylor award for Best Book of the Year from the American Political Science Association’s Interpretive Methods section in 2014.‍

‍
Z is assistant professor of international politics at Sciences Po Rabat, core faculty member at the Critical Security Studies Collective, and At-Large Middle East/North Africa Representative in the Executive Committee of the International Studies Association (ISA) Global South Caucus. Z holds a Ph.D. in political and social sciences from the Catholic University of Louvain. She was a Carnegie visiting scholar at the Center for Middle East and Islamic Studies of the University of North Carolina at Chapel Hill. Her article, “Postcolonial Politics of Dignity: From the 1956 Suez nationalization to the 2011 Revolution in Egypt,” won the 2015 Arab Prize of the Arab Center for Research and Policy Studies. In 2017, she was Fulbright Visiting Scholar at Harvard University Weatherhead Center for International Affairs. She was also in a faculty exchange program at Smith College. Z’s research is at the intersection of postcolonial theory and dignity politics

Giulia El Dardiry is a policy analyst with Oxfam-Québec and holds a PhD in cultural anthropology from McGill University. Her academic work focuses broadly on protracted displacement and refugee integration in the Middle East, particularly in Jordan, Syria, and Lebanon. As a core member of the Arab Council for the Social Sciences working group on Critical Security Studies in the Arab Region, Giulia has worked with colleagues to explore people’s everyday experiences of security and insecurity in the region. At Oxfam-Québec, she works on policy files related to the youth, peace, and security agenda (YPS) and the climate change-security nexus.

Firat Demir is a Professor of Economics at the University ofOklahoma (OK, USA). He received his B.A. from Bogazici University (Istanbul, Turkey), and his Ph.D. in economics from the University of Notre Dame (IN, USA).  Firat is also an affiliate faculty in the Department of International and Area Studies, the Center for Peace and Development and the Center for Social Justice at theUniversity of Oklahoma. Firat is an associate editor of the Review of Social Economy and the Journal of Economic Surveys. His main fields of research are economic development and open economy macroeconomics focusing on the issues of economic globalization, structural change, South-South trade and finance, long run development and growth, and political economy of development. Firat was a Fulbright Fellow in Montenegro in 2015-2016 and has been selected as a Fulbright Fellow in Lithuania for 2020-2021. Firat has published one co-authored book (South-SouthTrade and Finance in the 21st Century: Rise of the South or a Second Great Divergence), and numerous articles in journals, including World Development, Journal of Development Economics, Journal of Development Studies, Development and Change, Cambridge Journal of Economics, Review of Radical Political Economics, World Economy, Journal of Economic Surveys, and Foreign Policy.

Nicole Grove is an Assistant Professor of Political Science at the University of Hawaiʻi at Manoa, with affiliations in the Department of Women’s Studies, the Hawaiʻi Research Center for Futures Studies, and the International Cultural Studies Program. Her teaching and research interests are located at the intersection of international relations, security studies, and transnational Middle East politics, focusing on issues of gender, technology, surveillance, and visual culture. Grove's book Intimate Capture: Security, Desire, and the Middle East in the Data Imperium (under contract with Duke University Press) examines the materialization of novel regimes of control at the nexus of global imperial formations and contemporary modes of data capture. She is the recipient of the Fulbright Scholar Award in the Middle East and North Africa Regional Research Program, and was a visiting scholar at Abu Dhabi University and the University of Qatar in 2017. Her articles have been published in the European Journal of International Relations, Security Dialogue, Contemporary Political Theory, Critical Studies on Security, Globalizations, and the Journal of Critical Globalization Studies. Grove is also an Associate Editor for the journal International Political Sociology, and is on the International Advisory Board of the British Journal of Politics and International Relations.

Lisa Hajjar has an international reputation for her work on sociology of law and conflict, human rights, political violence, and contemporary international affairs. She is an interdisciplinary scholar who contributes to multiple fields in the social sciences and humanities, including Middle East Studies, American Studies, and Law and Society. Her current research focuses primarily on the US “war on terror,” particularly around the issues of torture, targeted killing, and Guantanamo. She is the only social scientist who has traveled to Guantanamo (14 times to date), where she conducts research and writes about the military commissions. Another area of current research focuses on human rights in the Arab world. Her journalistic writings have been published by The Nation, Al Jazeera English, Middle East Report, and Jadaliyya.

Karim Makdisi is an Associate Professor of International Politics, and Director of the Program in Public Policy and International Affairs at the American University of Beirut (AUB). He is currently an associated researcher in the Critical Studies Working Group at the Arab Council for the Social Sciences. Recent publications include: The Land of the Blue Helmets: United Nations in the Arab World (Los Angeles: University of California Press, 2017, ed. with Vijay Prashad); “Exploring the UN and OPCW Partnership in Syrian Chemical Weapons Disarmament: Inter-organizational Cooperation and Autonomy, ”Global Governance: A Review of Multilateralism and International Organizations (2019, with C. Pison-Hindawi); and “Writing about Insecurity and Global Politics in Beirut,” APSA MENA Newsletter (Spring 2019, with W. Hazbun and C. Hindawi-Pison).

Shana Marshall is Associate Director of the Institute for Middle East Studies and Assistant Research Faculty member at the George Washington University’s Elliott School of International Affairs. She is also a board member of the Middle East Research & Information Project as well as the Political Economy Project. She earned her PhD in International Relations and Comparative Politics of the Middle East at the University of Maryland in 2012. Her dissertation, “The New Politics of Patronage: The Arms Trade and Clientelism in the Arab World” examines how Middle East governments use arms sales agreements to channel financial resources and economic privileges to domestic pro-regime elites. Her work has been published by The Middle East Report (MERIP), The International Journal of Middle East Studies, Middle East Policy, Jadaliyya, the Carnegie Middle East Center, and various edited volumes. Prior to coming to George Washington University, Dr. Marshall was a research fellow at The Crown Center for Middle East Studies at Brandeis University and the Niehaus Center for Globalization and Governance at Princeton University. Her current research focuses on patterns of military entrepreneurship in Egypt, Jordan, and the UAE, as well as the intersection of militarization and finance capital.

‍
Rabie Nasser is a co-founder of the Syrian Center for Policy Research, working as researcher in macroeconomic policies, inclusive growth, poverty, and conflict socioeconomic impact assessment. Nasser worked for the State Planning Commission as Chief Economist and Director of Macroeconomic Directorate. Then, he worked as an Economic Researcher in Arab Planning Institute in Kuwait. He also worked on several projects with UN organizations and civil society’s initiatives.  He has MSc in Economics from Leicester University, UK.

‍This is a registered event that will take place on Zoom and will also be broadcast live on Facebook and YouTube.