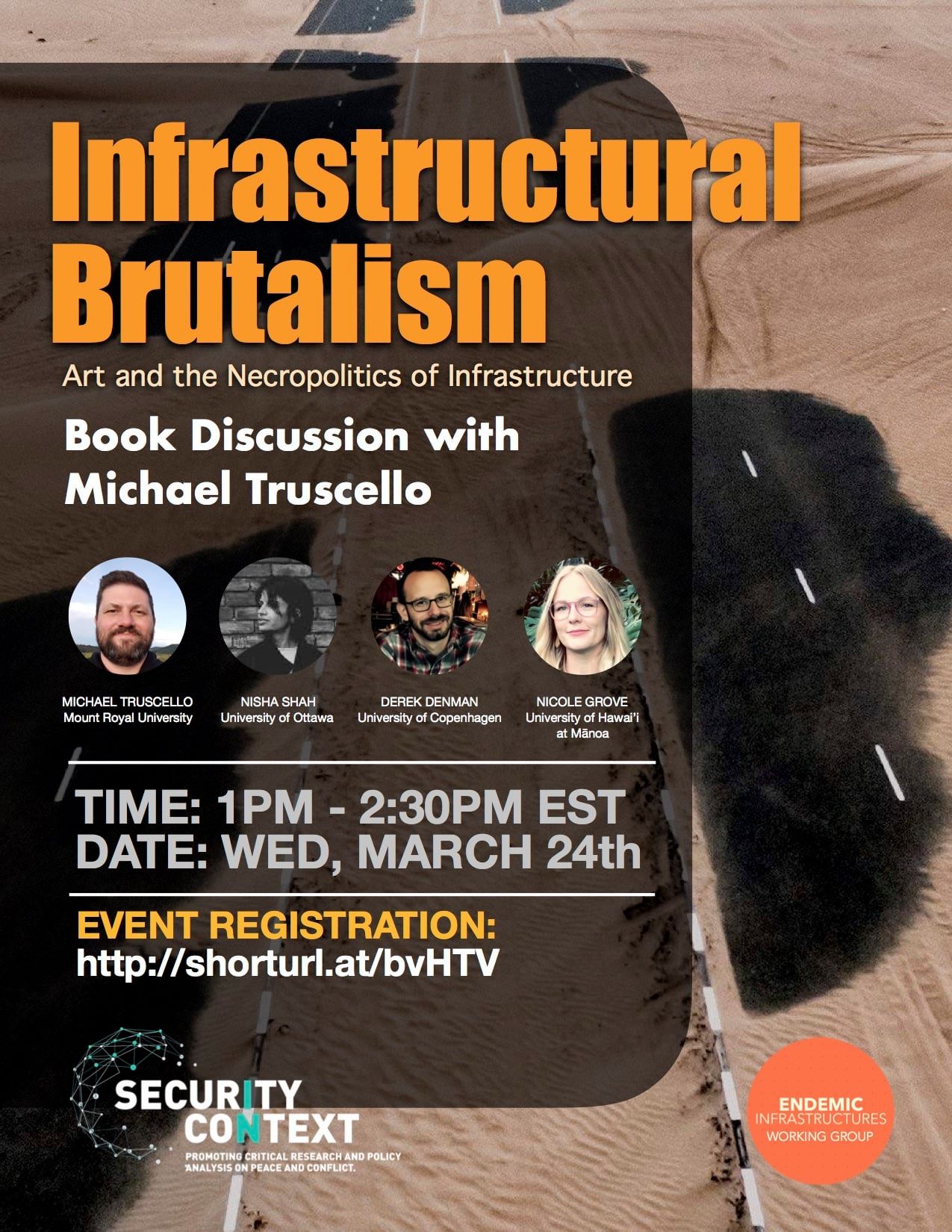 Please join Security in Context's Endemic Infrastructures Working Group on March 24th at 1PM EST for a discussion with Michael Truscello on his book Infrastructural Brutalism: Art and the Necropolitics of of Infrastructure.

Register for the event here.

Michael Truscello, Ph.D., is an associate professor in English and General Education at Mount Royal University in Calgary, Alberta. He is the author of Infrastructural Brutalism: Art and the Necropolitics of Infrastructure (MIT Press, 2020) and co-editor with Ajamu Nangwaya of Why Don’t The Poor Rise Up? Organizing the Twenty-First Century Resistance (AK Press, 2017). His recent publications on petrocultures have appeared as chapters in Petrocultures: Oil, Culture, Politics (McGill-Queen’s UP, 2017), Interrogating the Anthropocene: Ecology, Aesthetics, Pedagogy, and the Future in Question (Palgrave Macmillan, 2018) and Fueling Culture (Fordham UP, 2017). He directed the film Capitalism Is The Crisis: Radical Politics in the Age of Austerity (2011). He acknowledges that he lives and works on Treaty 7 territory—the ancestral and traditional territory of the Blackfoot Confederacy: Kainai, Piikani and Siksika as well as the Tsuu T’ina First Nation and Stoney Nakoda First Nation.

Nisha Shah is an Associate Professor in the School of Political Studies at the University of Ottawa. Her research explores the role of infrastructures and artifacts in world politics. Her work uncovers how and why things such as technological devices and physical geographies come to take particular form and function within the normative and ethical frameworks of governance and war.

Derek S. Denman is a political theorist with interests in contemporary political theory, democratic theory, and postcolonial theory. His research focuses on the spatial dimensions of politics, including critical border and migration studies, the role of architecture and design in democracy, and the history of space, place, and scale in political thought. His current book project, Fortress Power: Hostile Designs and the Politics of Spatial Control, examines fortification as a technique of power, and asks how early modern fortress architecture informs contemporary practices of controlling movement and enclosing space. Derek is currently a postdoctoral fellow at the University of Copenhagen.

Nicole Sunday Grove, founding member of Security in Context and convener of the Endemic Infrastructures working group, is Associate Professor of Political Science at the University of Hawaiʻi at Manoa, with affiliations in the Department of Women’s Studies, the Hawaiʻi Research Center for Futures Studies, and the International Cultural Studies Program. Grove’s research centers on three areas: the globalization of security and surveillance technologies; media infrastructures and transnational networks of violence; and the relationship between space, security and design.