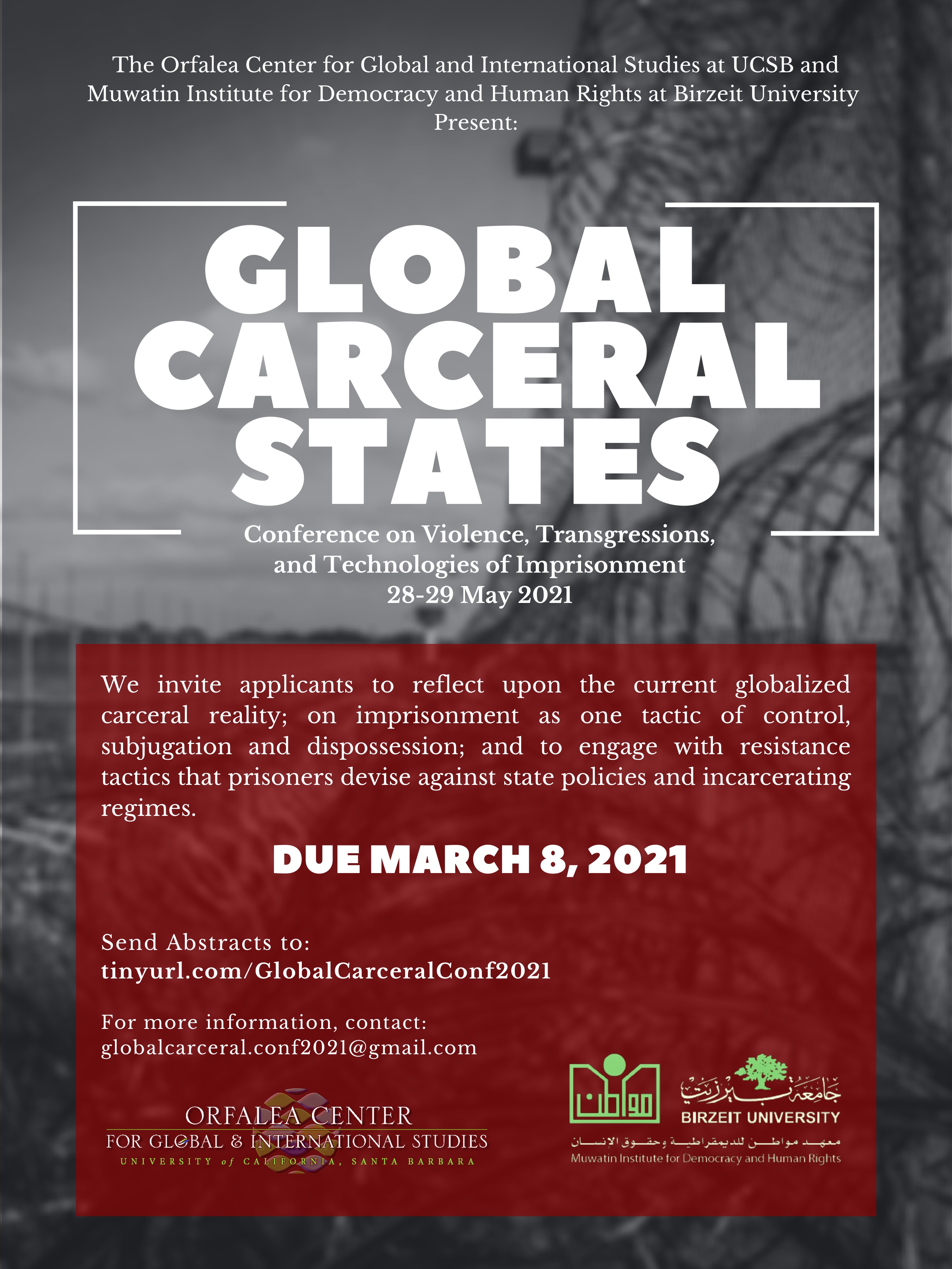 This event is organized in partnership between the Orfalea Center for Global andInternational Studies at the University of California – Santa Barbara (UCSB),and the Muwatin Institute for Democracy and Human Rights at Birzeit University.

Security and control, once a monopoly of states, now engage and encompass numerous actors, including non-state organizations and groups, private companies, and technology industries. Yet imprisonment remains a central tactic for managing and confining members of populations deemed to be risky, hostile, or superfluous.

Prisons are a central feature of the lives of millions around the world, and many people are dealing with memories and traumas related to their own imprisonment and/or that of members of their families or communities.

Indeed, the ramifications of the War on Terror have merely intensified the fortification of carceral realities around the world as incarcerating regimes devise ever-adapting means to further subjugate incarcerated populations and deny them their most basic rights.

We invite applicants who wish to participate to reflect upon the current globalized carceral reality, and on imprisonment as one tactic of control, subjugation and dispossession. The conference presents an opportunity for scholars to contribute to our understanding of prisons, torture, violence, securitization and related issues. It also invites engagement with the wide range of resistance tactics and transgressions that prisoners, worldwide, devise against state policies and incarcerating regimes.

The following themes are suggested, but submissions can address other issues related to carcerality and resistance:

-      Modes of violence and torture behind bars.

-      The globality and transnational sharing of carceral practices.

-      Life during and after prison; sociological aspects of confinement.

-      Cultural and media representations of imprisonment.

-      Prisoners’ transgressions and strategies of resistance.

-      The political economy of prisons and other forms of carcerality.

Abstracts of papers (around 250 words) along with a short bio (around 100 words) should be filed using this link no later than March 8, 2021. We ask that those who are selected to participate send their full papers by May 10, 2021.

We invite submissions and papers in English, Arabic, and Spanish, and the conference will havesimultaneous translations.

For questions or queries related to the conference, please contact: